Beginning with efforts involving the mouse-ear cress, humankind has been working to decrypt the genomes of major food and energy crops since 2000, and the market size of crops (of which genome structures have been transformed) is growing at an average annual rate of 10%. The size of the international seed trade market surpassed the USD 8 billion mark and is rapidly growing, making the market the arena of struggle among multinational corporations.

Molecular breeding is a core area of agriculture & life sciences, where genomes are decrypted, molecular markers are developed (so that the genes can be monitored), and useful genes are transformed and used. Molecular plant breeding is quickly replacing conventional breeding methods (which was referred to as the Green Revolution) and is expected to bring a future where plants are custom-made to the demands of consumers.

The Next-generation Bio-green Program conducted by the Rural Development Administration is the national R&D project expected to drive the development of Korean agriculture & life sciences. The Molecular Plant Breeding Center will conduct world-leading research by concentrating the capacities related to molecular plant breeding in Korea, and will spearhead the technological research for the promotion of the plant bio-engineering industry. The Center will host seminars and implement public relations programs to help the public understand what plant bio-engineering is and become more interested in this dynamic field. The Center will also strive to bring success to the Next-generation Bio-green program by cooperating with related organizations. 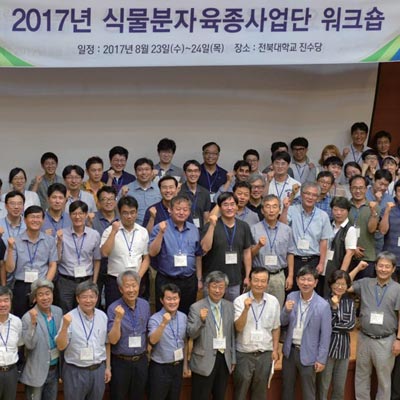