Does CALS teach students how to farm?
Many people think that agriculture is about farming. Of course, farming is a significant part of agriculture, and CALS can be deemed as a college that teaches how to farm. However, we believe there is so much more than the notion that CALS simply teaches how to farm. Seoul National University’s CALS believes that we are responsible for leading and developing the Korean agriculture and life sciences industry as ‘”an institution that researches and educates about: the phenomenon related to life and environment (which is the foundation of agriculture); and the material, resource and sustainable energy industries that are based on agriculture, all of this in addition to teaching how to farm.”

Accordingly, if your question is, “Does CALS only teach students how to farm?” the answer is “no”. CALS researches and educates about agriculture and life sciences—to be more specific, it conducts research and provides education on cutting-edge knowledge and technology in the wide variety of fields that deal with phenomenon related to: life and environment; natural materials and resources; and sustainable energy.

Seoul National University’s CALS has made significant contributions to the development of national economy through its Green Revolution and White Revolution. Professor Shingyu Hyun transformed desolated Korean hills into densely covered forests in the 1960s, and professor Moonhoe Huh triggered the Green Revolution, which provided Korea with food self-sufficiency and achieved Korea’s desire cherished for its 5,000 year history, by developing the Tongil Calrose - with these two achievements alone, CALS helped Korea build a foundation for its industrialization.

Now, agriculture is turning into an industry that determines the quality of people’s life, as it satisfies diverse demands of consumers. While agriculture of the past simply produced foodstuff for people, agriculture today creates new values and cultures through advanced science and technology. CALS stands in the center of such change and is taking a dynamic leadership of the industries of agriculture, food and life sciences by advancing related technologies and transforming agriculture into science. 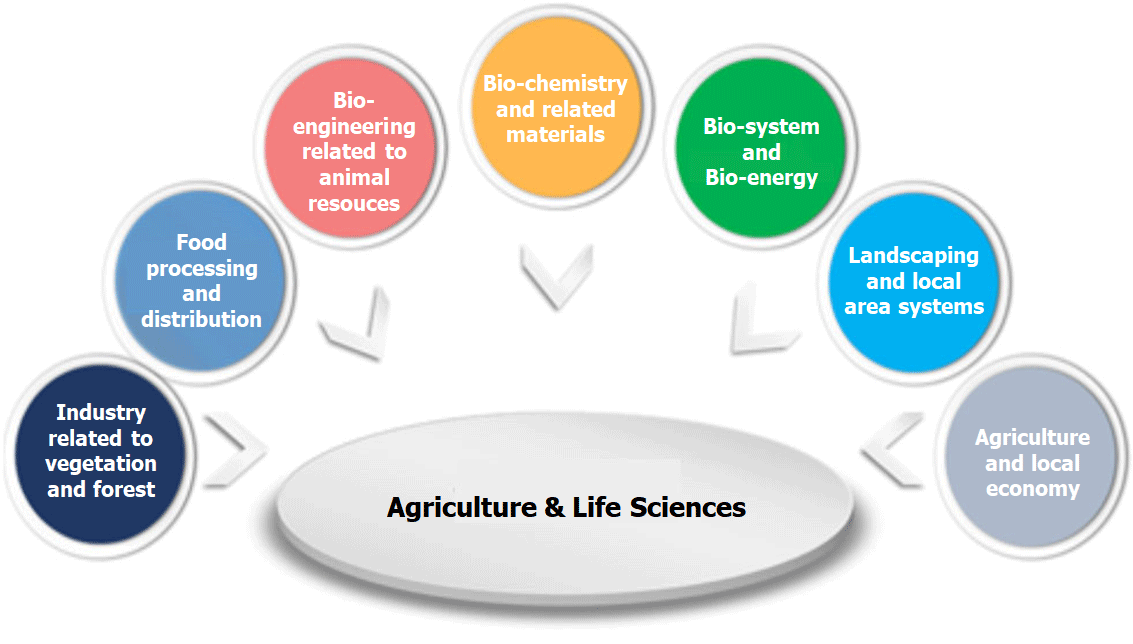 ­ “In the future, bio-engineering, agriculture and environmental technology will be combined into hyper-agriculture, which will take the leading role in food and medicine markets.” - Alvin Toffler
­ “Agriculture will become one of the most positively potential industries within two to three decades.” - Jim Rogers
­ “Agriculture faces challenges and enormous economic opportunity at the same time.” - Barack Obama

CALS plays a pivotal role in leading and developing the industries and careers related to agriculture and life sciences and the field’s most prominent research and education institution thereof. Thus, the role and research scope of CALS of Seoul National University is expected to continue to expand further in the future.

‘Agriculture - the Industry Expected to Grow in the Future’, a report issued by Korea Rural Economic Institute(“KREI”) in 2014, painted a very promising picture of the future of agriculture, for the following reasons: ① the values of agriculture and farming villages are growing, as society gives greater weight to emotional values; ② instability of food supply and demand and changes in demand for agrifood; ③ development of life science industries and expansion of the scope of agriculture; ④ globalization and export of agricultural products, ⑤ lifestyle changes towards the slow life and slow food. (See the diagram below.)
It is anticipated that such change will create demand for the CALS graduates in various areas of industries. 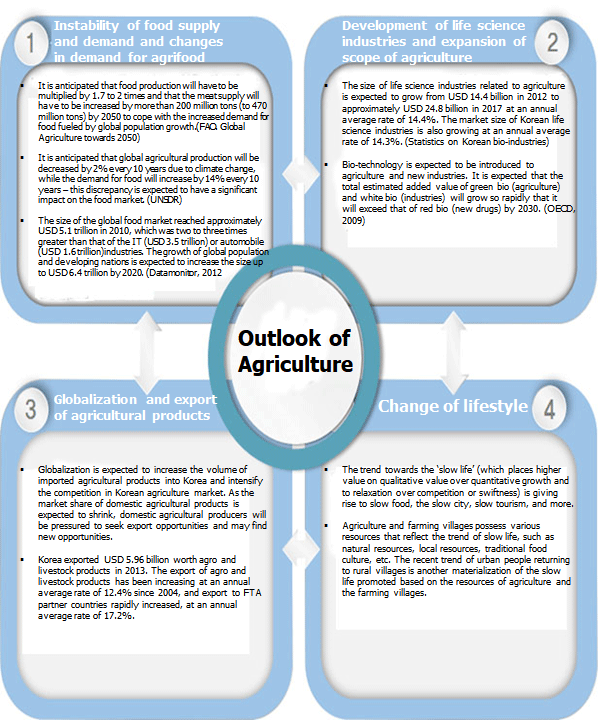 First, the bio-engineering industry. According to the latest information made available by Datamonitor, the size of the global bio-engineering market in 2009 grew by 5% (to USD 227.1 billion) from the previous year, and the annual average growth rate of the market was expected to be approximately 7.2%. The U.S. led the global bio-engineering industry with a 41.2% (USD 93.7 billion) share of the market, followed by the EU and Asia-pacific who accounted for 21.5% (USD 49 billion) and 21.4% (USD 48.6 billion), respectively.

Source: ‘Bio-industry Development Policies of Other Countries and Korean Bio-industry Development Plan’,
Ministry of Agriculture, Food and Rural Affairs(“MAFRA”), 2013.
The importance of the food industry is also growing day by day. According to “Major Indices on the food Industry in 2015” published by the Korea Agro-fisheries & Food Trade Corp., the size of the Korean food industry (including food & beverage manufacturing and restaurants) as of 2013 was KRW 156.87 trillion, which grew by 2.9% year-on-year. The number may seem low, but when compared to that of 2004 (KRW 91. 89 trillion), the sector has grown by a whopping 70.7%, and as of 2007, the industry recorded an annual average growth rate of 7.5%. When combined with the food distribution (retail and wholesale) business, the size of the wider Korean food industry reaches KRW 332 trillion. 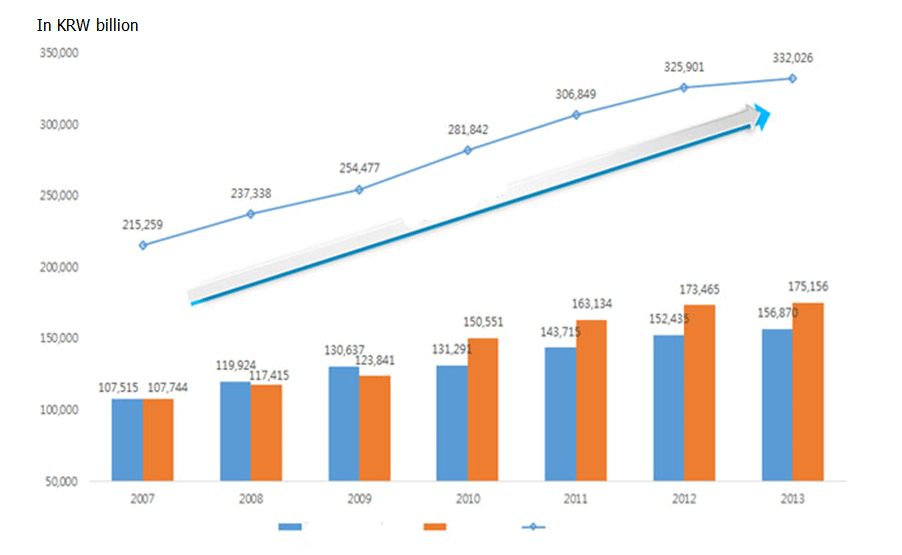 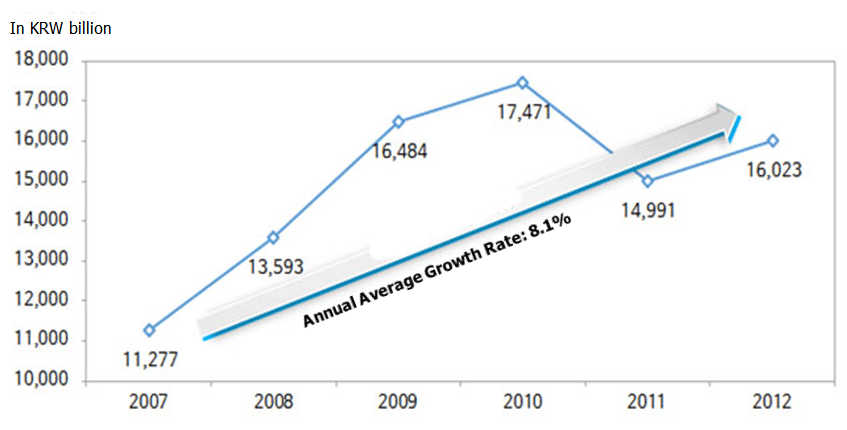 Source: The 5th Basic Plan for Forests 2013~2017, Korea Forest Service, 2013
The government is eager to develop the industries related to agriculture and life sciences. According to the 3rd Mid-to-long-term Basic Plan (Draft) for Development of Agriculture & Life Sciences for 2013~2022 published by the Rural Development Administration in 2013, the government invested KRW 582.9 billion for the past ten years (from 2003 to 2012) at a 34% annual rate of increase, as part of programs to develop the agriculture and stock-raising industries through agriculture and life sciences. Such quantitative indices show that the sizes of industries related to CALS will continue to grow. 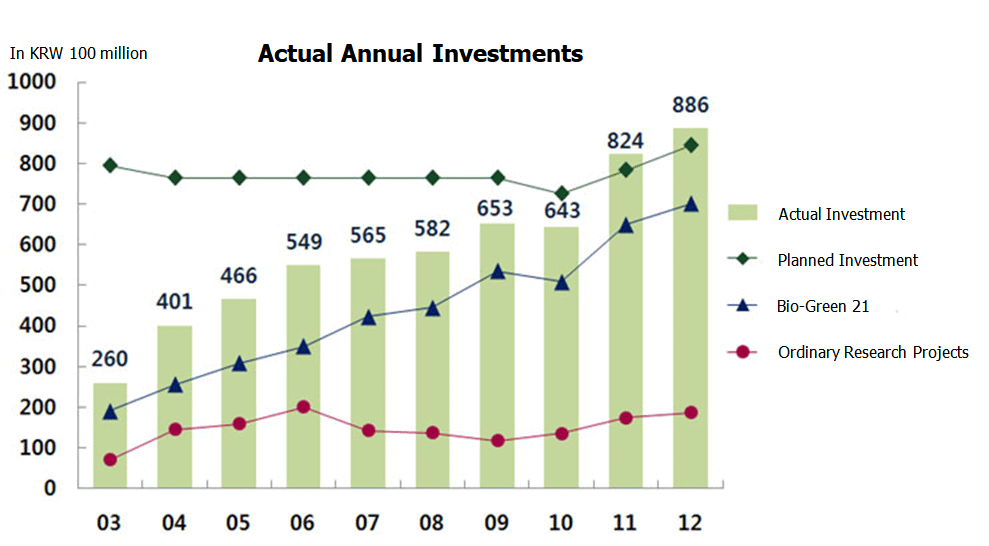 Source: The 3rd Mid-to-long-term Basic Plan (Draft) for Development of Agriculture & Life Sciences for 2013~2022, The Rural Development Administration, 2013.
What is the difference between the Crop Science and Biotechnology major and the Horticultural Science and Biotechnology major?
The two majors share similarities—they both study plants in terms of life sciences. However, the Crop Science and Biotechnology major mainly deals with all food, medicinal and energy crops, while the Horticultural Science and Biotechnology major mainly deals with horticultural plants, such as fruit trees, vegetables and flowers.
Why is the Vocational Education and Workforce Development major under CALS?
When the Vocational Education and Workforce Development major was originally established, the program was called “Agriculture Education”. The name was changed to the Agricultural Industry Education major before it finally received its current name. Because the two former majors mainly dealt with practical work related to the business of agriculture, the major was placed under the Department of Plant Science of CALS. The scope of the concentration’s subjects was subsequently broadened, but since the program had originated under agriculture education, the major still belongs to the Department of Plant Science.
It seems that the subjects of study for the Forest Environmental Science and the Environmental Materials Science overlap - which major would be more advantageous in terms of the study of forests?
The Forest Environmental Science major studies the preservation, management and use of forest resources, and the Environmental Materials Science major studies how to efficiently use the lumber derived from these forests. As trees get old, they consume more oxygen and absorb less CO₂. Accordingly, old trees must be harvested and young trees must be planted to maintain the efficiency of forests. For us to maintain the performance of forests at an appropriate level, the subjects related to these two majors must be actively studied.
What subjects does the Biosystems Engineering major deal with?
The Biosystems Engineering major includes an exploration into many subjects, including agricultural machinery, bio-sensors, medical engineering, and more. Please refer to the websites of CALS and its majors for more information.
What is the difference between the Department of Materials Science and Engineering of College of Engineering and the Biomaterials Engineering major of CALS?
While the Department of Materials Science and Engineering studies chemical materials using ceramic, metallic and other materials, the Biomaterials Engineering major studies bio-materials such as proteins and living organisms..
What is the difference between the Department of Food & Nutrition of College of Human Ecology and the Food Science and Biotechnology of CALS?
While the Department of Food & Nutrition studies food and their nutritional properties, the Food Science and Biotechnology major studies the entire process related to food, including production, processing, distribution and storage, all from the perspective of life sciences.
Does CALS offer student exchange programs?
Seoul National University has entered into academic exchange and cooperation agreements with major universities around the world and is engaged in a variety of exchange and partnership projects under these programs. The student exchange program is an especially active component of this system.

Exchange students to three regions are selected every semester, which means that students who wish to take part in the program must plan ahead. Candidates must present the language test score which is no older than two years from the date of your dispatch to the partner school. The most important issue related to successfully completing the student exchange program is selecting the school you want to study in. Thus, it will be helpful for you to fully review the information on the school appropriate to you and the classes you would like to take. We recommend that you collect information about the schools and choose the school you wish to attend in advance, by visiting the web sites of the schools with which Seoul National University maintains student exchange program agreements or by visiting the Office of International Affairs. Exchange students to three regions, including Asia, the Americas and Oceania and Europe are selected every semester.