COVID-19, which is rapidly spreading on a global scale since January 2020, has become a global pandemic. More than 10,000 patients have emerged and societal panic is increasing. Our university was not excluded from this risk either. The Seoul National University faced a solitary year of “2020” in the aftermath of the spread of COVID-19. Owing to the risk of infection, the freshmen orientation and Sae-teo (the orientation session for freshmen for each college), which was scheduled to be held in February, the entrance ceremony, where a large number of people gather, and the graduation ceremony scheduled for February 26, 2020, had to be cancelled, causing frustration among the graduates and parents.

Currently, Seoul National University is operating a restricted “untact” lecture system for disease prevention. Thus, the previously crowded campus is now quiet, and the students are waiting for the campus to be filled with energy again. The Seoul National University introduced ZOOM as a means of conducting “untact” lectures. The students continue to learn through interactive communications with professors at their homes, without physically going to school. As such, the fact that they could attend the lectures at home instead of in-class lectures with risk of group infection is recognized as the strength of these untact lectures. However, as most experiments and practices are replaced with online video lectures, there also exists the disadvantage of lacking field experience. In particular, students in the College of Agriculture and Life Sciences, most majoring in different sciences, are experiencing the aftermath of the untact lectures such as being unable to proceed with experiments, practices, and so on.

Apart from the establishment of the untact lecture system, the College of Agriculture and Life Sciences also installed thermal imaging cameras at entrances to check the symptoms of visitors, restrict access to people with symptoms, and prevent the occurrence of infection inside the school.

Owing to the prevention measures including the untact lectures, the infection inside the school is properly being controlled. Although three confirmed cases in the initial stage of the prevention measures tested positive for COVID-19, all three cases have recovered completely now and discharged from hospitals. Fortunately, except for the confirmed cases from the initial stage, there are no additional infected persons. Despite that, the school announced their plan to maintain a continuous prevention system according to the guidance of “distancing in daily life” by the government.

Although there was some degree of accomplishment, the students are feeling inconvenienced because of the overall prevention measures. One student, Hyun-Jung Jung, in the student council of the College of Agriculture and Life Sciences is expressing her feeling of discontent because she had to cancel all the freshmen events she was preparing as the deputy head of the department, and owing to the spread of COVID-19, she was unable to properly pursue the student council projects. In particular, the “Laboratory Coats Group Purchase Project” she is in charge of faced many difficulties when trying to distribute laboratory coats because of the confusion in scheduling and initiating the untact lectures.

Furthermore, she expressed that she was feeling inconvenienced because the results are different when the lectures are conducted online compared with when performing a direct experiment, owing to the characteristic of the school having many major experiments or practical classes. She also stated that although the untact lectures have inconvenient aspects, she is grateful for the professors and lecturers who are carrying out the lectures smoothly even in such a difficult condition.

Not only the students but also the professors are feeling the challenges of many changes due to the untact lectures. Professor Ho Kyoung Son of the Department of Applied Biology and Chemistry noted the difficulties in interaction as an inconvenience of the untact lectures. He stated that interaction is not easy for identifying the level of understanding for classes by looking at the facial expressions of students during the lectures, and that there are times when it is difficult to test whether the classes are proceeding properly because the lecture is given in front of a camera by himself. He mentioned that he has a higher degree of fatigue after giving a lecture now in comparison to presenting general lectures. He also revealed an inconvenience of presenting lectures without a question and answer session.

Nonetheless, Professor Son stated that in response to the spread of COVID-19, he plans to give lectures flexibly according to the preventive policies of the headquarters of the Seoul National University and the College of Agriculture and Life Sciences. In addition, he delivered his message to students of the college that he will reorganize the lecture data according to the type of untact lectures and prepare lectures by considering efficient testing and evaluative methods.

Although an unprecedented crisis caused by COVID-19 brought a large confusion inside the school as well, with the efforts by teachers and students in compliance with preventive guidelines and establishment of the remote lecture system, etc., for social distancing, a large-scale infection has not occurred. The College of Agriculture and Life Sciences stated that it would continue operating the preventive system according to the trend of COVID-19 patients in Korea and the responsive policy of the government. 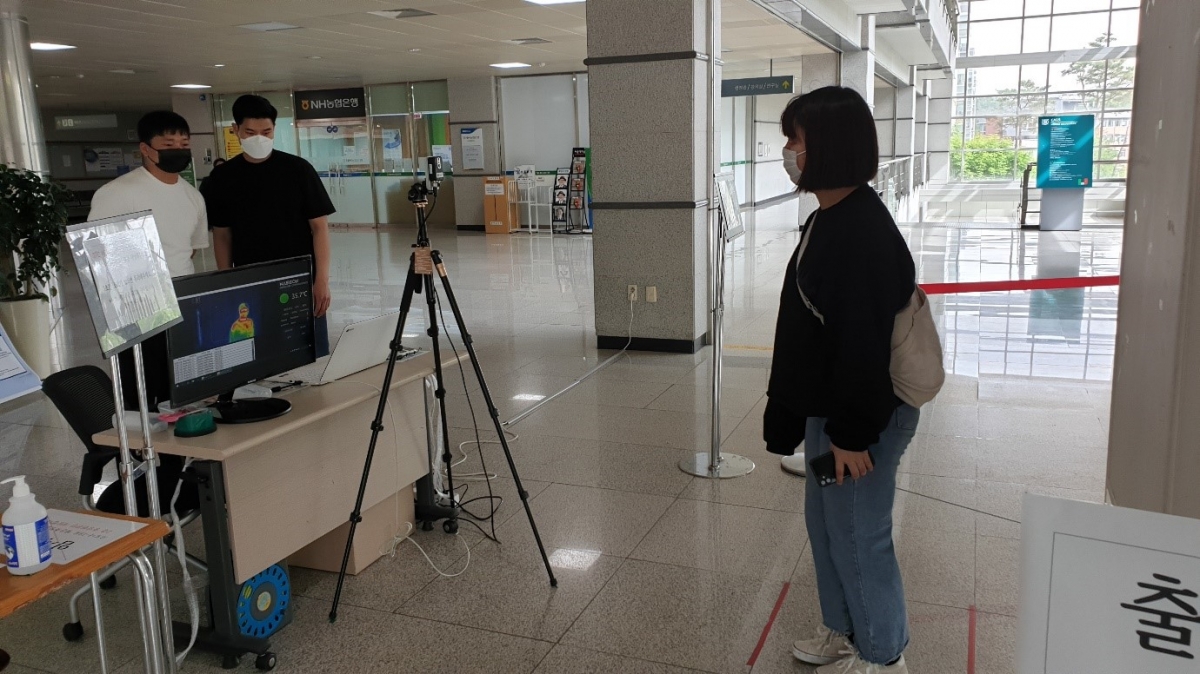 Figure 1. A thermal imaging camera is examining for symptoms at the entrance of the main building of the College of Agriculture and Life Sciences.