Interview with Major Donor to SNU Foundation (Hyeong-Nyeon Kim admitted at SNU in 1995, Major in Agricultural and Resource Economics)

Dunamu’s President Chi-Hyeong Song and Vice-President Hyeong-Nyeon Kim visited SNU in August 2021. They donated a total amount of 20 billion KRW to SNU in the name of Dunamu. We interview with Hyeong-Nyeon Kim, who donated 5 billion KRW to the Department of Agricultural Resource Economics and Rural Development. He entered SNU in 1995 and majored in Agricultural and Economics. While studying at SNU, he was interested in mobile devices, and became one of the founders of Danal Inc., which led the fintech industry. In 2012, he established Dunamu with President Chi-Hyeong Song. Dunamu has rapidly grown up in a short period of time by launching Stockplus, a stock trading platform, and Upbit, a cryptocurrency exchange. Hyeong-Nyeon Kim has played the leading role in making Dunamu the best fintech start-up.

Reasons for Donation to SNU Foundation

Vice-President Kim said, "At the time of graduation, there was a social atmosphere that it was a norm to go on a set path after graduation and discourage starting a business," adding, "But I was able to be here thanks to the support and backing from professors, seniors and juniors at the time when I started the business." He also said, "I hope we could be helpful spreading the enthusiasm for entrepreneurial activities of young talents who are continuously striving for the development of society even in this difficult environment," adding, "Dunamu will continue to practice win-win growth and fulfill its social responsibility."

Vice-President Kim said that he feels heavy responsibilities as the business grows up. Since the platform business is for trading assets, he said he will do his best to keep the high standard of risk management. He also expressed his ambition to globalize the cryptocurrency exchange service for advancing to the overseas markets. He said that while he wants to expand the business, he would like to find not-for-profit work that can help the society as well. 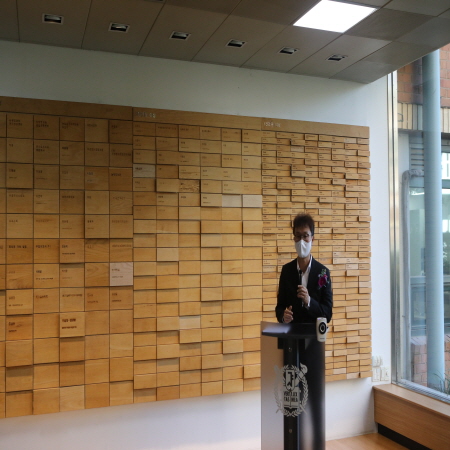