Team ‘Nimble Tractor,‘ led by Professor Hak-Jin Kim in the Department of Biosystems and Biomaterials Science and Engineering at CALS in SNU, won the grand prize at the Segye Times AI Robot Car Race 2021, This event convened by Segye Times and supported by the Ministry of Land, Infrastructure, and Transport, Korea Autonomous Driving Development Innovation Foundation (KADIF), and Korea Association of Robot Industry. The competition was Korea’s first autonomous driving contest conducted in a simultaneous start manner, and 8 universities which study autonomous driving and AI participated in the competition. The participating teams, provided with the same ‘racing platform’ and self-driving sensors, competed with their autonomous driving algorithm technology. The competition was the first race that was conducted in the absence of not only a driver’s operation but also remote control, and the self-driving vehicles started at the same time to run the race. The  first team completing 10 laps of the FMTC track at the SNU Siheung Campus was to take the winner’s trophy. The 8 participating teams were given the ranks 1 to 8 grids (starting points) based on the best lap time record in the preliminary race, and all the participating teams started simultaneously at the final race. The Grand Prize of the first competition went to Team ‘Nimble Tractor’ of SNU, the 2nd prize to Team ‘HUSTLE’ of Hongik University, the 3rd prize to Team ‘FLETA_ADR’ of Halla University, and the 4th prize to Team ‘ADYson’ of Yonsei University. Dongseok Choi (24), the leader of Team ‘Nimble Tractor’ of SNU, said, “We constructed the algorithm, focusing on the precision of path tracking and the safety of driving.” Dongsek also expressed the ambitions for developing self-driving robots for agricultural purposes. 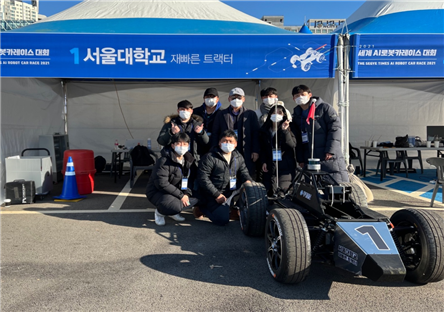