Old Building 75 as Seen from the Front

Building 75 to be born anew

Also known as the university press building, Building 75 (constructed in 1983) is located near Building 200 around Cafeteria No. 3. In addition to the university press, it is also used to house the consumer’s collective and student facilities for club activities and student groups. These facilities have all relocated by March of 2021, and Building 75 now stands ready for reconstruction.

Reasons for the decision to reconstruct Building 75

CALS Building 200 currently in use was originally designed to accommodate 106 faculty members at the time of its relocation to Gwanak campus. However, the number of faculty has increased to 125, and research expenses have almost doubled since the relocation, which has led to insufficient space for research. Moreover, total hours allocated for classes also increased from 798 hours in 2003 to 1,072 hours 17 years later, and the college is forced to utilize faculty meeting rooms, seminar rooms, and even spaces belonging to other colleges to make up for the insufficient space for classes. To address the chronic problem of insufficient space, CALS has been discussing a possible reconstruction of Building 75 since October 2015, and its plans in 2021 involve constructing a new Education and Research Center for Agriculture and Life Sciences Education. A total of KRW 27.4 billion has been allocated to the construction budget, drawing funds from government subsidy, internal austerity measures within CALS, and outside donations.

How the reconstruction affects members of the college

Demolishing Building 75 and constructing a new building in its place is expected to take 34 months, and it is slated to be open for service by the Spring semester of the academic year 2024. The tennis court and wall-climbing facility near Building 75 are still available for use during the construction work. A representative from the Office of Planning and Coordination of CALS said the college will do its best to manage the construction environment properly so that members’ exposure to noise and dust is minimized.

The consumer’s collective left the building when its contract expired in 2019, and the university press relocated to a new space in March 2021 and is expected to move into Building 75 again after the reconstruction is complete. Student clubs also finished their relocation thanks to the help of CALS and the Division of Student Affairs in the university administration in finding alternative locations, and discussions will be held over their eventual move-in to the reconstructed building. A representative of a student club previously housed in Building 75 says they were initially worried about the relocation process because they had many instruments to handle but appreciated the active involvement of college administrators in making the transition as smooth as possible.
Expected changes
Upon reconstruction, Building 75 is expected to have six floors above the ground in addition to two underground floors, with a combined area of 11,047m2. An administrator involved in overseeing the reconstruction mentions that some of the adjacent spaces originally used as parking areas could be replaced with a green space following the recommendations from the Environmental Impact Evaluation Board of the City of Seoul. Reconstructed Building 75 plans to house the historical research record registry, the university press, SNU alumni association, and NICEM, in addition to ample spaces for education and research such as classrooms—large, medium, small, and computerized lecture rooms plus computer rooms—and research space for the faculty and students. We hope that the new Building 75 proves useful to all members of CALS. 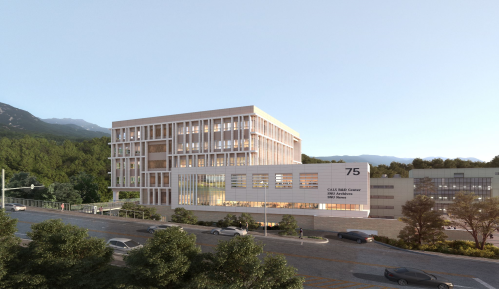 Planned Appearance of Building 75 after Reconstruction