The College of Agriculture and Life Sciences at Seoul National University has experienced some major changes such as its relocation from Suwon to Gwanak campus in 2003 and continues to face myriad changes to this day. Dean Lee Suk-ha, who served as the 25th and 26th Dean of CALS, has been leading the college at the center of many innovations such as remodeling Building 75 and reforming the graduate school system. He is nearing the end of his term this coming July. The CALS student press met with Dean Lee to hear about his accomplishments and memories.

Motivation for taking up the deanship of CALS

Dean Lee had served four years as Director of National Instrumentation Center for Environmental Management (NICEM) and two years as Associate Dean of Academic Affairs overseeing the recruitment and promotion of faculty. Through these experiences, he realized the importance of college-level administration in addition to research efforts in making a better college, which led him to apply for deanship and assume the post to advance the goals of CALS.

Memorable experiences during the last four years as Dean

Dean Lee recalls the organizational restructuring within CALS as one of the most memorable experiences. At the beginning of his term, only a handful of departments such as the Department Agricultural Biotechnology were members of the BK21 group, a major program for raising a generation of highly-qualified researchers in Korea. Desiring to increase the number of BK21 participants, he embarked upon an organizational reform of the graduate program which combined several different majors to create the Department of Agriculture, Forestry, and Bio resources and created the Department of Biosystems Engineering by separating it out from a previously combined program. To build consensus on the process, he had to hold over a dozen meetings with the faculty. These efforts eventually bore fruit when the fourth installment of BK21 featured three different groups—Department of Agricultural Biotechnology, Department of Agriculture, Forestry, and Bio resources, and Smartfarm Group—from CALS.

Future plans after retiring from the deanship

Dean Lee says that he felt his grip with research loosen as he spent six years in administrative positions in CALS. However, he kept leading a lab of ten or so members even during this time since he believed the value of a professor to be dependent on their presence in labs leading students. As part of his plan to return to his lab upon leaving the post and filling the remaining three years until his scheduled retirement from professorship, he would like to apply for a sabbatical leave for one year to focus on leading research and to spend the last two years in making many breakthroughs in his research.

Future directions for CALS
CALS at SNU has experienced and studied a wide variety of agriculture ranging from traditional farming to the application of cutting-edge agricultural technology. Dean Lee believes that the college has been in the leading position in the nationally important fields of agriculture and biosciences, playing an instrumental role in the development of Tongil Rice and reforestation efforts. Today’s society is experiencing rapid change as the fields of biological engineering, smart farm, and others assume greater importance. The dean feels that our future direction should involve preserving the natural environment for the country and the nation, providing food, and contributing to people’s lives. He also stresses the importance of internationalization for these efforts, and he regrets that international students are having difficulty with classes mostly offered in Korean despite the college having highly qualified faculty and students. Hence, he advises CALS to redouble its efforts toward internationalization and contributing to the international community. 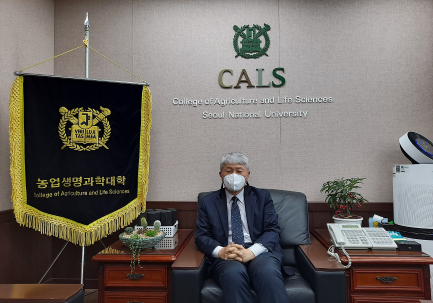