Back in last November, the Asian Black Bear-shaped bookshelf was installed in U-space on the ground floor of CALS Building 200 and began to be filled with books. This Gibook & Take (Book Free Zone) was prepared by Green Earth with SNU, a student organization for energy and the environment, to aid in the protection of forests and resource recycling. We asked the organization’s representative, Kim Jun-gyo, about the meaning of the Book Free Zone and how students could take advantage of it.

SNU has the reputation of being the largest carbon emitter and energy consumer in the City of Seoul. As such, Green Earth with SNU installed Gibook & Take (Book Free Zone) to look for ways for students on campus to play a role in reducing carbon footprint.

According to Kim, many textbooks are not needed after completing the associated classes for the semester, and Gibook & Take (Book Free Zone) would allow students to donate unneeded textbooks to be reused by others. The U-space was chosen as an ideal place for such a depository due to large student traffic, approachability, and available space large enough for a bookshelf.

By November 2020, a total of 51 books have been donated by campus members, with a combined number of pages at 19,634. Environmental organizations from outside the university also donated 651 books totaling 168,686 pages. Considering that reusing a 300-page book reduces carbon dioxide emission by .5kg, the donated books would have helped reduce carbon footprint by 313kg. A continued monitoring since last November reveals that an additional 28 books—with 2,511 pages—have been put in the recycling pool and about five books were reused per month on average. Unfortunately, this figure falls short of the initial expectations set by Green Earth with SNU. They originally anticipated adding 1,000 books per year to the recycling pool to reduce carbon footprint by 1,645kg, but the actual figure was unfortunately lower than expected.

Kim notes that many people still don’t know how to properly use the book depository due to insufficient publicity. Moreover, some of the donated books went missing, which reduced the number of books most interesting to the students, eventually causing even fewer people to use the program. He says that some plans for this year include posting advertisements at the Book Free Zone on how to use the service and conducting public awareness campaigns so that more people could take advantage of it. In addition to the U-space in CALS building, another depository is also available on the ground floor lobby of Sinyang Library at the College of Engineering. 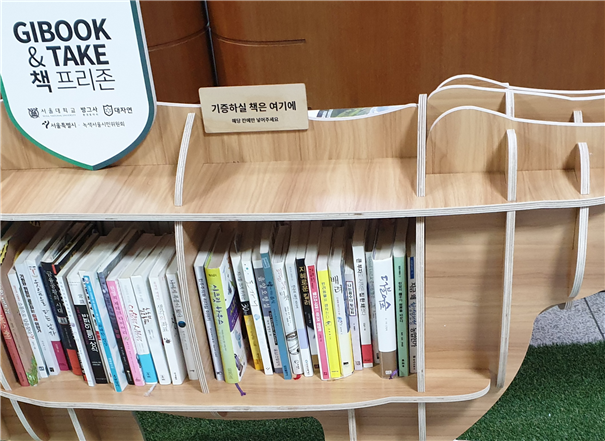