With the development of modern genetic engineering technology, the technology to produce enzymes, recombinant proteins and antibodies from transgenic organisms using mammal mammary glands or bird egg white is now available. A bioreactor is an apparatus in which a biological reaction or process is carried out to produce organic matter through fermentation or cell culture, especially on an industrial scale. Because of a relatively short production time and ample reproductive capacity (a chicken can lay more than 300 eggs a year), the chicken egg is regarded as the most effective animal bioreactor for the production of recombinant proteins including anti-canter antibody.

As egg white of chicken is excreted from the oviduct, it is possible to produce the protein we want in the egg if we make transgenic chicken using an oviduct specific promoter. Consequently, the research team produced transgenic chicken that produces anti-human CD20 monoclonal antibody (mAb) which is the representative anti-cancer antibody for non-Hodgkin's lymphoma, chronic lymphocytic leukemia, and rheumatoid arthritisusing primordial germ cells (PGC) - the most well-established germline competent cell in birds. They also evaluated the pharmacology of the produced chickenised CD20 mAb.

As a result of measuring the deposition of cCD20 mAb in transgenic chickens through quantitative analysis, the output of the cCD20 mAb and the transgene copy number increased as transgenic chickens grew from generation to generation. Large amounts of recombinant protein production may require another process replacing ovary specific genes with objective genes. This case, in which the production of egg white protein is uncertain, can be overcome by retaining the male transgenic chicken of the hetero-type. Cultivation of transgenic animal cells are representative bioreactors for production of recombinant protein for treatment. Monoclonal antibodies produced in mammalian cells (such as Chinese hamster ovary cells, CHO cells) go through fucosylation. On the other hand, the egg of the transgenic chicken bioreactor does not containing fucose residue. The research team found that the CD20 monoclonal antibody produced by transgenic chickens had high levels of mannose and afucose (without terminal fucose residue) types through glycosylation analysis. This form is effective in enhancing the Fragment crystallizable (Fc) function of antibodies.

The fact that the Fc region of the antibody is a key part of antibody mediated cell death makes this a very meaningful study. In other words, the Fc region of the antibody can induce cell death in combination with the complement protein and effector cells. Also, the lack of fucose improves the binding strength of these effector cells and antibodies to lead to effective antibody-dependent cell cytoxicity (ADCC) for the target cell. Thus, the CD20 monoclonal antibody from transgenic chicken displayed a higher level of complement-dependent cytoxicity (CDC) and ADCC activation than the commercial CD20 monoclonal antibody 'Rituximab'

However, there are also limitations to this study. So far, compared to the large production of antibodies with CHO cells, eggs from genetically-modified chickens can't produce enough antibodies. Professor Han’s team predicted that further research would help overcome this and lower production costs.

In conclusion, this study revealed that bioreactors produced in transgenic chicken, unlike monoclonal antibodies produced in the cell line of mammals, are a more effective Fc effector as afucosylation occurs. In addition, the study also proved that the transgenic chicken bioreactor is a much more efficient system for producing therapeutic proteins such as anticancer antibodies. 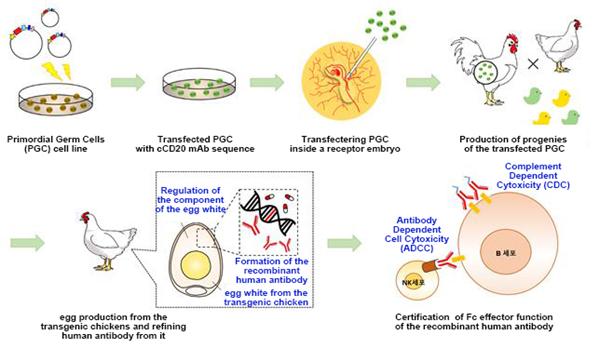 Figure 1. The production of transgenic chickens and separation, refining and functional testing of recombinant human antibodies