This work was published in Nature Communications in 2020.

Fungal pathogens have huge impact on health and economic well-being of human by causing life-threatening mycoses in immune-compromised patients or by destroying crop plants. Rice blast disease, caused by ascomycete fungus, Magnaporthe oryzae, destroys rice enough to feed 60 million people every year. In addition to this socio-economic significance, the fascinating developmental and infection biology of this fungus made this pathosystem as a compelling model to study host-pathogen interactions. Professor Lee’s research group in the Department of Agricultural Biotechnology at Seoul National University previously reported the first functional genomics of pathogenicity genes in this fungus (Nature Genetics 39: 561-565, 2007) and received well recognition from the community (Nature Biotechnology 25: 542-543, 2007).

Plants employ multi-layered immune systems for protection from diverse groups of pathogens such as PAMP- and effector-triggered immunity. Both types of immunity entail large-scale transcriptional reprogramming orchestrated by phytohormones and transcription factors. Pathogens also elude host defense by releasing effectors that collectively function to manipulate pathogen surveillance systems and immune responses. Pathogen effectors typically display a high level of genetic diversity due to arms races between plants and pathogens and can be classified according to where they function (apoplastic and cytoplasmic effectors are outside or inside of plant cells, respectively). Although some bacterial and oomycete effectors have been shown to function in host nuclei (nuclear effectors), no such effectors have been found in fungal pathogens.

In this study, Professor Lee’s group reports the first compelling evidence that the rice blast fungus employs nuclear effectors (MoHTR1 and MoHTR2) to reprogram the transcription of plant immunity-associated genes and modulate the susceptibility/resistance of rice against multiple pathogens. These findings help remedy a major knowledge deficiency in the mechanism of plant-pathogen interactions.

Discovery and validation of these novel nuclear effectors were accomplished via a series of experiments using multidisciplinary approaches.

1. Genome mining to identify potential nuclear effectors based on their sequence features associated with protein secretion and DNA binding
2. RNA-seq and protein structural modeling analyses to evaluate if their expression is induced during infection and characterize the structure of their DNA-binding domain, respectively
3. Live-cell imaging of fluorescently-tagged MoHTRs to demonstrate their secretion and translocation into rice nuclei
4. Protein binding microarray and yeast one-hybrid assays to identify the effector binding element (EBE) for each MoHTR
5. Both transient and stable expressions of each MoHTR in rice to demonstrate their regulation of the expression of immunity-associated genes
6. Evaluation of how transgenic rice lines expressing each MoHTR respond to bacterial and fungal pathogens with different modes of infection 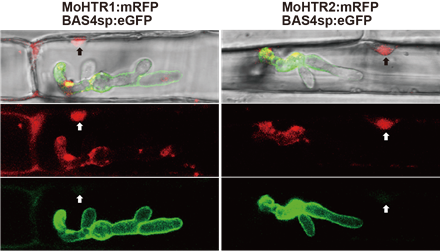 Fig.1. Translocation of MoHTR1 and MoHTR2 into rice cell and migration into rice nuclei. MoHTR1: mRFP and MoHTR2:mRFP were mainly localized in BICs and the nuclei of invaded rice leaf sheath cells. Arrows indicate rice nuclei.

In summary, both nuclear effectors are secreted via biotrophic interfacial complex (BIC), translocated into the nuclei of initially penetrated and surrounding cells through plasmodesmata, and reprogram the expression of immunity-associated genes by binding on EBEs in rice. Their expression in transgenic rice exhibited the ambivalent immunity: increased susceptibility to M. oryzae and Xanthomonas oryzae pv. oryzae, hemibiotrophic pathogens, but enhanced resistance to Cochliobolus miyabeanus, a necrotrophic pathogen.

In addition to the conceptual advancement of fungal nuclear effectors, MoHTR-mediated ambivalent immunity would provide a challenging paradigm on plant-pathogen interactions. Genetic manipulations of resistance/susceptibility genes may inadvertently offer a double-edged sword to plant health by creating unintended susceptibility to non-target pathogens.

Considering the conserved immunity mechanisms against fungal pathogens, our increased understanding on nuclear effectors and ambivalent immunity will provide new insights into the mechanisms and evolution of host-pathogen interactions in not only plant diseases but also human and animal mycoses.