Cities with high population densities and a high concentration of infrastructure tend to show higher temperatures compared with nearby regions due to the urban heat island effect. As a megacity with a population of 10 million, Seoul wages a war against summer every year—and this is no exaggeration. Cheonggyecheon, a stream that flows through downtown Seoul, provides a small rest area for Seoul residents who have to walk on the asphalt road in the forest of buildings on hot summer days. Professor Lee’s research team quantitatively analyzed the river cooling effect (RCE) of Cheonggyecheon and published the results in the international journal, Landscape and Urban Planning.

The RCE refers to the decrease in temperature of the air surrounding a body of water to below the urban area’s temperature due to the stream’s high specific and latent heat. Because of this effect, urban rivers are commonly suggested as a solution to urban heat islands. However, studies have mostly focused on the RCE of large rivers, and few have carefully considered the characteristics of cities surrounding the river such as infrastructure and building structures. In this study, the research team studied the RCE of Cheonggyecheon in terms of river cooling distance (RCD) and river cooling intensity (RCI) and quantitatively analyzed these parameters for eight streets. Based on the results, they analyzed the effect of building height, street width, and wind speed on the RCE (Fig. 3, 4). 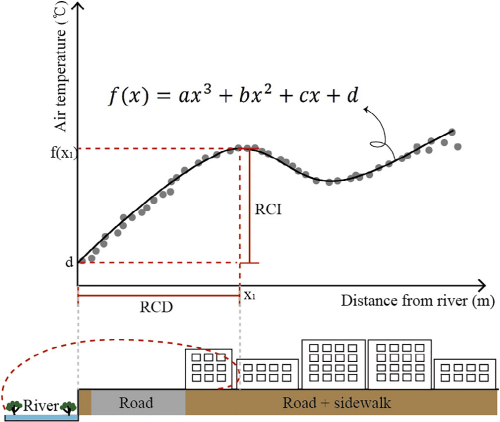 Air temperature tends to increase away from a stream. Depending on geographical characteristics, the temperature increasing until the certain point (x1). By expressing this relationship between distance and temperature as a cubic equation, the temperature difference when the x-value of the maximum value is equal to RCD and the maximum value and d are equal to 0 can be expressed as the RCI (Fig. 2). The RCE of Cheonggyecheon was found to be, on average, 0.46 ℃ up to 32.7 m away from the stream at 2 p.m. and 0.37 ℃ up to 37.2 m away at 10 p.m.

Street width and building height around Cheonggyecheon was found to negatively correlate with both RCI and RCD; this is because the higher the buildings, the greater the amount of radiation reflected onto the ground surface. Contrary to a previous study (Jamei et al., 2016) that reported that taller buildings facing a stream interfere with the smooth flow of wind, there was no significant correlation between building height and wind speed in this study. Wind speed positively correlated with both RCI and RCD. This is because strong winds allow evaporation to actively occur and water vapor to spread across the stream.

For researcher Chaeyeon Park (PhD student of Agriculture and Life Sciences, enrolled in 2017), who is the first author of this study, the major research topic was “what are some street environment designs that can reduce the heat experienced by pedestrians?”. Park said, “in large cities like Seoul where there is little opportunity for heat to escape, it would be useful to take advantage of Cheonggyeheon’s RCI when designing the road layout.” She hopes that the results of this study will provide important insights for urban planning. Indeed, roads are currently found in the cooling effect zone of Cheonggyecheon, meaning that cars enjoy the stream’s cooling effect instead of humans. It is reported that humans feel the cooling effect of Cheonggyecheon to be greater than it really is. Park said, “the RCI of Cheonggyecheon, which measures about 0.5 degrees, may seem small. However, a subtle change in radiant heat can cause humans to feel warmer, so humans will feel a huge difference even with a 0.5-degree difference in temperature.” She explained that this is why it feels chillier in the shade of a tree despite the fact that the temperature difference in the shade and the sun is not large. 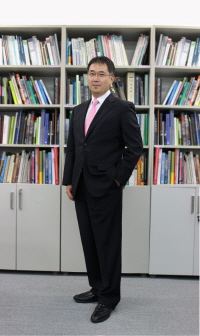 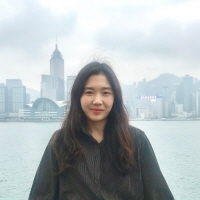