Most of the plants in the world  use sunlight to survive. Photosynthesis is a well-known process by which plants convert light energy to chemical energy. However, Some of the light that reaches the chlorophyll within plants is absorbed and converted to heat or reflected before it can take part in photosynthesis.  Fluorescence from chlorophyll has been indirectly sensed at macro-level units using remote sensing. To verify the fluorescence data obtained using this indirect technique, Professor Young-ryul Ryu’s research team at the College of Agriculture and Life Sciences (CALS), Seoul National University (SNU) conducted direct sensing of fluorescence and revealed a linear relationship between the amount of fluorescence emitted and the amount of light absorbed by plants.
Professor Young-ryul Ryu proposed a new model of the amount of fluorescence emitted from plants. Related studies have mostly produced low-resolution results using remote sensing. These data do not go beyond producing a light use efficiency model that suggests a linear relationship between fluorescent materials within chlorophyll and the amount of photosynthesis taking place. After successfully sensing fluorescence using a direct technique in farmland located in Cheorwon, Professor Young-ryul Ryu presented new data that suggests a closer relationship between fluorescent materials within plants and the amount of light absorbed rather than the amount of photosynthetic product. It is of great scientific significance that Professor Young-ryul Ryu confirmed plants’ use of solar energy, which previous researchers had only been able to observe indirectly. 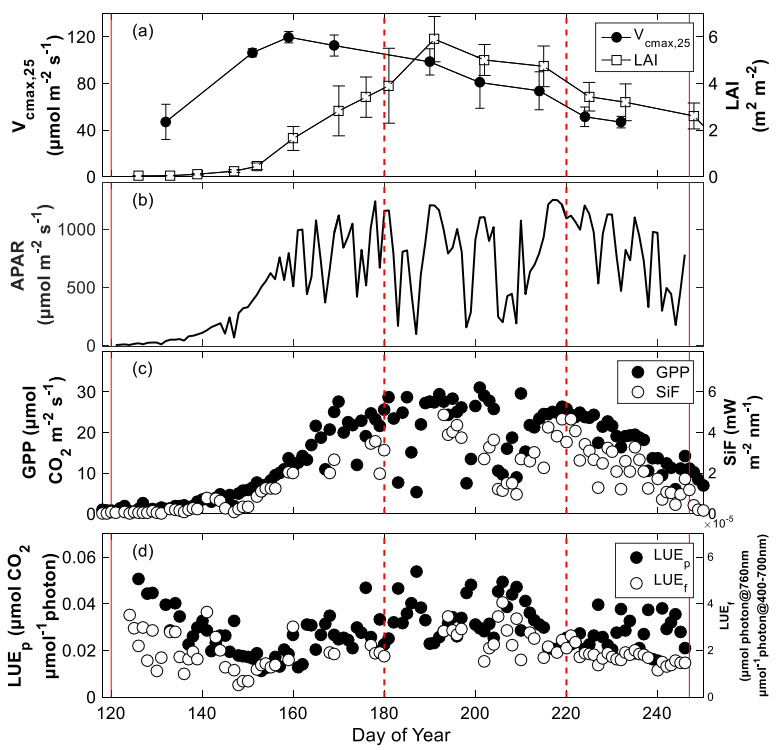 Sensing results obtained by the research team graphed by the day of year. Seasonal variations in Absorbed photosynthetically active radiation (APAR) explained most of the seasonal variance in Sun-induced chlorophyll (SiF) and gross primary production (GPP).

This achievement was only possible because of the rather unusual approach used by Professor Ryu; he directly sensed fluorescence at the canopy level. Professor Ryu, who had consistently conducted remote sensing and research on plants, thought that on-site investigation was necessary to verify existing data obtained by indirect sensing techniques. Using the research funds he had received in 2014, Professor Ryu began his new research using a method that differed from existing methods. Since very few studies directly measured fluorescence at the on-site canopy level, Professor Ryu employed a unique technique with which  measurements started at the macro-unit level. His research team went through multiple rounds of trial and error. Professor Ryu recalled feeling lost as he collected data during the first two years of his research. However, he soon added that it was through this experience that he was able to learn many lessons in addition to refining his skills in light sensing, extraction, and processing techniques. Professor Ryu then spent a research year at the Carnegie Institution of Science, Stanford University in 2017. There, he was asked to partake in joint research hosted by an expert from the same field. It was through all these years of hard work that Professor Ryu managed to obtain such valuable results on fluorescence emission. 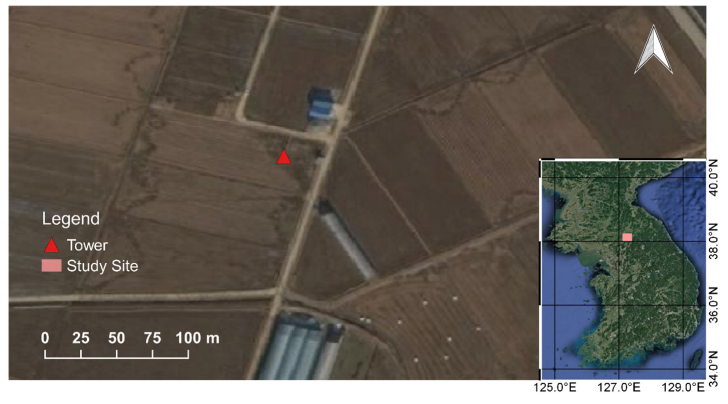 Studies on direct sensing of fluorescence are rare, meaning that Professor Ryu’s recently obtained data was in high demand. It is now time to apply the fruits of the hard work that took place from 2014 to 2018 to various projects and reap new results. Professor Ryu is currently working with the Ministry of Environment on an oxidation research project for drone-aided fluorescence measurement at Gwanggyo Lake Park, Suwon. In addition to studying fluorescence emission from plants, Professor Ryu examines the response of various plant species during extreme weather events such as heat waves or intensive rainfall on a per-park basis. Professor Ryu is also planning to contact NASA for his future research, aimed at expanding the range of direct fluorescence measurement. He said that drones will allow him to expand the scope of his research from the colony level to the country level. He has also been developing sensors for direct sensing at his research lab. He is currently using a spectroscope that costs over 20 million won and plans to develop a more usable spectroscope with the same efficiency but at 1/10 of the cost of the current spectroscope. Once developed, the spectroscope is expected to have high marketability in the field of precision agriculture and forest monitoring.

Professor Ryu explained that landscape architecture is the study of the expression of various landscape elements through a platform called “design” and emphasized the need to develop a deeper understanding of and the ability to use each element constituting the platform. Vegetation and earth are what make landscape architecture unique in terms of landscape design compared to other related fields. Thus, research on vegetation, earth, and behavioral changes are necessary in order to advance to other research  topics involving the actual use of these elements. A good example of such research is the projects currently being run by the Ministry of Environment, aimed at converting labor-focused vegetation management to machine-based management. These changes regarding landscape elements may be what fueled the emergence of smart cities, big data, and the fourth Industrial Revolution.
Professor Ryu said that when he was a student, he had never thought of being involved in the area of research he is currently in and that he hopes for students to be creative and adventurous. He hoped  that students would not quickly fall into things that are already well known but would take a new, adventurous approach. He drew a comparison with the fact that even in the field of landscape architecture, which is often considered design-focused, there is a process of establishing the real-time vegetation network at the city level. 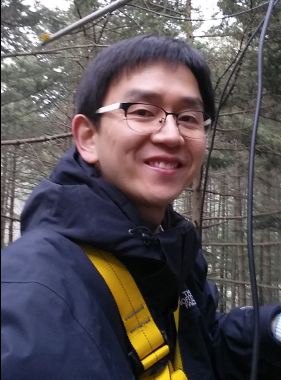