Humans can protect themselves from pathogenic and viral microorganisms. Infected host cells have used their own immune system to try to prevent pathogens, but the pathogens have constantly evolved to build a defense system to protect themselves from host-cell attacks. This study, carried out in a laboratory led by Professor Nam-Chul Ha, investigates defense system against host-cell attack. Vibrio vulnificus septicemia is a malignant sepsis that affects the infected person’s entire body with such symptoms as fever and chills. It is a disease with high mortality, particularly infectious to those with deteriorated immune functions.

To understand the defense systems of Vibrio vulnificus, it is first necessary to understand Peroxiredoxin (Prx). They play a vital role in scavenging reactive oxygen species (ROS) and reactive nitrogen species (RNS), which are secreted due to the immune system of the host cell. Peroxiredoxin is cysteine-based peroxidase enzyme that reduces ROS through its catalytic cycle. Recently, a new type of Prx, Prx3, was identified in the pathogen Vibrio vulnificus as being crucial role for survival in macrophages. It employs only one catalytic cysteine residue to reduce peroxides. Prx3 is different from other peroxiredoxins in that its expression is controlled by IscR and that it acts as an important virulence factor. 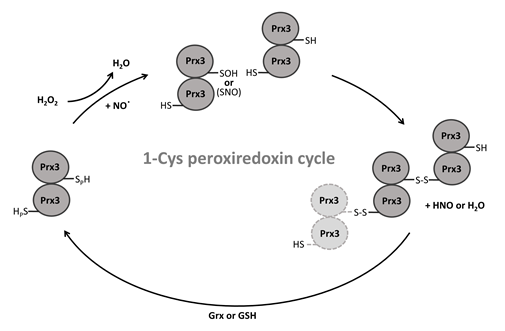 [Figure 1] The catalytic cycle of Prx3

According to the prevailing mechanisms, the Cys in 1-Cys Prxs is itself oxidized to Cys-SOH through attack of the substrate peroxide. Cys-SOH is then reduced by the reductase Grx or GSH. This study presents another pathway for the reduction of Cys-SOH in 1-Cys Prxs, which might complement the direct reduction of Cys-SOH by Grx or GSH under certain circumstances. In this pathway, the catalytic residue (Cys) in 1-Cys Prx plays a dual role in the catalytic cycle. Moreover, in Professor Ha’s laboratory, additional studies demonstrated that expression of Prx3 increases in NO stress by a transcription factor, IscR and that Prx3 can reduce nitric oxide. This significant research clearly suggested the mechanism of 1-Cys Prx as molecular level through a variety of biochemical experiments as a molecular level. These findings contribute to the understanding of the diverse functions of Prxs during pathogenic processes.

This study on Prx3 has established a foothold for an in-depth understanding of the detailed mechanism how Vibrio vulnificus resist ROS/RNS secretion system of host cell. Professor Ha’s research team is currently conducting research on the defense mechanism to show how bacteria react to disinfectants other than hydrogen peroxide and nitric oxide, such as hypochlorous acid. As the research progresses and the understanding of bacteria’s antioxidation activity deepens, we will be able to better understand microbial attacks and defense mechanisms and to respond more effectively to the pathogens, which ultimately shorten human life.