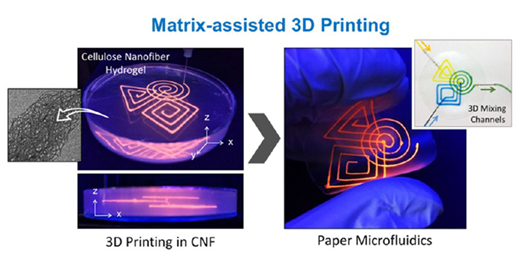 3D printing has emerged as a core technology expected to materialize the 4th Industrial Revolution, with many industries adopting it. Generally, silicon or acrylic resin (thermoplastic high-polymer materials) have been used to print three-dimensional objects. However, these materials are not adequate for creating the microfluidic system that controls the flow of fluids and the transfer of heat and substances, so researchers have been searching for new ink and materials to serve as the printing bed (matrix).

Professor Hyun’s team converted the cellulose nanofiber into hydrogel, which is used to create the print matrix (the support and frame of output from 3D printers) and printed a three-dimensional micro channel structure inside the matrix. The team also used a petroleum jelly to create an ink (which will create the channel inside the hydrogel) that can be discharged at room temperature. The team was able to create three-dimensional microfluidic systems of various designs using this cellulose nanofiber and ink, with the microfluidic systems so created capable of performing as biosensors.

The study was conducted in the following manner: First, the team created a hydrogel containing 1% cellulose nanofiber (“CNF”). Second, the team chose a petroleum jelly compound to print the microfluidic channel and introduced the three-dimensional channel. Third, the matrix was dried, and the CNF hydrogel was compressed in a vertical direction, converting it into a transparent, flexible sheet. Thereafter, the ink printed inside was removed to complete the microchip through which a fluid could flow. Lastly, a variety of channels were designed, resolutions evaluated, and possibility of the outcome being used as a paper-based sensor assessed.

The method used in this study is economically efficient and has significant commercial potential while the outcome is a light product made from paper. Made of cellulose, it is eco-friendly and can be easily incinerated after use.

This new three-dimensional microfluidic system using cellulose nanofiber has a number of advantages over the existing pulp fiber microfluidic system. It does not require any adhesion or assembly to realize a three-dimensional shape, minimizing test material loss as its open nature means the fluid does not stay in the channel. Also, many outcomes can be realized using the optical transparency - it can be used as a biochip or biosensor with which one can visually monitor the inside of the channel and the movement of fluid.

Professor Hyun explained the meaning of this outcome by saying, “Through this new microfluidic system using 3D printing technology and eco-friendly materials, we can replace existing silicon-base chips. The new system can be used in a variety of areas, such as medical services - tests for proteinuria, malaria or pregnancy - and environmental services, such as tests for toxic gas or heavy metal ions.”

This study was published in ACS Applied Materials & Interfaces, the internationally-recognized material science journal (top 8% in the area of materials, and with an impact factor of 7.504) on July 24, 2017. 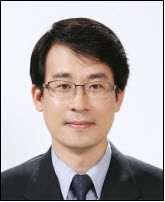