The team collaborated with a research team led by Professor Wonho Choe of KAIST and with the National Fusion Research Institute’s (Director General: Suk Jae Yoo) Plasma Technology Research Center to develop the process technology that uses APP to sterilize pathogens and improve the microbiological safety of food products of animal origin. During the process of meat sterilization, it was discovered that applying APP makes the meat look slightly green in color. Consequently, the team identified APP as the meat color change mechanism.

The research showed that APP created a variety of nitrogenous compounds (e.g. NO2-, HNO2, etc.) which had a reaction with myoglobin, which determines the color of meat, and formed nitrimyoglobin, which has a green color. Interestingly, it was also confirmed that adding sodium dithionite, a strong reducing agent, can induce the formation of nitrosomyoglobin, which has a red color. 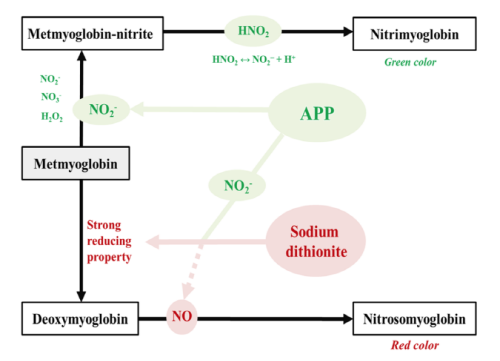 [Figure 1] Effects of APP and Addition of a Reducing Agent (Sodium Dithionite) on Myoglobin, which Determines Meat Color

At the same time, the team also studied the physics of the plasma reaction. This study proved that ozone (O3), which has a bactericidal action, is usually generated in the early stages of plasma reaction, and as time goes by, ozone reacts to the nitrogen in the air to generate nitrogenous compounds (NO2, N2O3, etc.).

In this cooperative research, Professor Jo and his team made an important discovery in the areas of meat science and physics, but they did not stop there. Based on the research, they carried out studies utilizing APP in processed meat products. In general, meat products go through the curing process, which mixes curing agents including sodium nitrite for the purpose of taste, color, and preservability. During this process, nitrite ions (nitrite, NO2-) cause meat to have an appetizing red color, stop the propagation of harmful microorganisms, and prevent oxidation. For this reason, nitrite is an essential element in the curing process, but it used to be used in the form of artificially synthesized sodium nitrite (NaNO2). Synthetic nitrite, which is often used in industrial settings, is harmless to the human body when used in the right doses, but some consumers tend to avoid it because it is a synthetic additive. To meet this consumer need, the meat-processing industry has made efforts to find a substitute for synthetic nitrite, but there are limitations in terms of undesirable flavor, and cost. However, because the above research confirms that plasma generates nitrite ions in air, which, along with antioxidants, forms nitrosomyoglobin in meat, now APP technology allows a replacement for the synthetic nitrite used in meat products.

Professor Jo’s team confirmed that sausage and ham can be produced with APP-treated water, therefore generating a number of NO2– ions. This study was introduced in February 2018 in Advanced Science News, published by Wiley (https://www.advancedsciencenews.com/new-innovative-plasma-curing-process-ham/). Furthermore, in order to expand APP usage, the team managed to apply plasma technology to the production process to manufacture processed meat products without using plasma-treated water.

Through interdisciplinary cooperative research between meat science and plasma physics, Professor Jo and his team conducted a series of studies that identified the scientific mechanism and developed the technology that the industrial sector can utilize, thereby pursuing both academic development and industrial innovation.